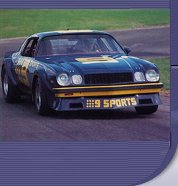 "FORDSHIT," they cried in complete and total unison, brandishing placards that referred to Allan Moffat's sexual activity.
We were driving past the Torana supporters' domain on the mountain at Bathurst, an area hostile to anyone driving anything but one of Australia's own. We were in a Ford Transit van, painted in the now-familiar blue and white colours of Ford's great Hardie Ferodo hope, the Cobra.

It certainly wasn't the way to make friends. The Holden fans voiced in no uncertain terms that this vehicle was an intruder, besides being a "heapa shit". "Let's get out of here," said my passenger, with more than a little terror in his voice, expecting a rain of beer cans at any second.

"This is a one-of-a-kind vehicle," he panted, wiping sweat off his brow while preparing to leap out of the vehicle and repel the expected attack. Just for the record, to dispel anyone's doubts, my mother doesn't even know Malcolm Fraser, and she and my father were definitely married when I was born.

But if the Holden fans had knots in their knickers - which was undoubtedly the reason behind their hostility - the Ford fans were far more enthusiastic upon our arrival. "You f - - ken beauty," along with other terms of endearment, heralded our arrival. They craned for a better view of this "bloody marvellous" vehicle, downing beer cans in a display of respect.

But Bathurst isn't just a motor race, it's an endurance test for everybody who makes the annual sacrifice. The first trick is to find a camping area which, in the middle of a dark (oh how dark it was), wet, and miserable night, isn't easy.
"Excuse me, but you wouldn't happen to have a couple of bits of wood that I can borrow," -- ''What for?"
"It's just that my caravan seems to be sinking." Of course you can always take a campervan - one of the modern wonders of holidaying. The only trick to campervan living at Bathurst is not to end up with the Quasimodo syndrome. Once settled, you can begin to truly appreciate the scenic wonders of Bathurst, which include the newly renovated toilets, concreted pit area and - how could anyone forget - the thrill of the new overhead bridge.
The Australian Racing Drivers' Club spent over $1 million on circuit improvements, somewhere or other. "Lend me five cents will ya mate," was a familiar line in the exclusive new shower complex.
In their infinite wisdom the ARDC installed a metering system in BOTH showers which, thankfully, only had to cater for about 600 dirty, sweaty men.

The floors in the showers were usually more muddy than the pits, but at least the water was hot. . . if you showered at one o'clock in the morning, or while the practice session, that you particularly wanted to see, was in progress.
But at least it only cost five cents to get clean. The great thing about Bathurst is the culture that gathers from all over Australia. There's Fosters from Melbourne, Swan from W.A., Cascade from Tasmania and good ole KB from NSW. There's never any difficulty in telling what State anyone's from - or is in, for that matter. Just browse through the empties scattered around the various tents.

Of course, everyone brings their own culture with them. Peter Brock left practice early on Saturday to go and watch the VFL Grand Final in Melbourne on TV. "Oh, mate,. it's the only game," he says with great conviction.
At least he's a good driver! . But what are Bathurst people like? Bathurst goers come in a great array of shapes, sizes and temperaments.
First and foremost, we have the drivers and their pit crews. Without this group we wouldn't have a race, and even with them it's sometimes dubious.
It's their job to give the spectators a thrill - you know, the oohs and aahs variety.

Of course some of them often do the spectators a good turn such as chopping up firewood for instance. Do you have any idea how much firewood a car can chop up when it hits a tree at about 160 km-h?
If you'd like to know, the best one to ask is Phil Brock who tried this little experiment in Peter Janson's Torana.
Phil happened to roll end over end on top of the mountain, collecting two trees in the process.
It was an unexpected boon for campers who put away axes and saws and happiIy collected the remains (of the tree, not Phil).

However, it was decided after this that a Torana A9X doesn't really have a future as a wood-pulping machine. The drivers practise, practise, and then practise some more, while the overworked pit crews keep rebuilding the cars because they've been practising too much.
It's quite a never-ending, boring affair - just ask the spectators.
Team drivers discuss tactics while mechanics discuss why "what'sisname's" car keeps going, instead of launching a piston through the bonnet.
Some are happy. Some are not. Next on the list are the motor racing enthusiasts who go to Bathurst for love. . . of what, I really cannot be sure.

They get to the circuit early every day, look and listen, and offer their opinions, whether you want them or not.
Lovers of the sport are easy to recognise. Stop watches are draped around the neck, notebooks clutched tightly in the hand and, invariably, they wear tight jeans, a tight T-shirt, and have their arm draped casually around the shoulders of an equally tight young lady.
The T-shirts always have "I like Swipe" or some other equally sweeping statement emblazoned across the front.
'Wow, Brocky did a 2 min 20.006" they cry in sheer amazement, throwing their fists into the air with the verve of Mohommad Ali. Or, it could be a "Jesus, Moffat's car is smoking. . . looks like big trouble," as Moffat flicks the butt of his camel filters out the window of his Cobra.

Next come the media who, for want of a better phrase, are obligated to be at Bathurst.
I mean, it's their job to tell everyone what happened - something which you can't always find out on TV.
"I'm really sorry, Bondy, I didn't mean to shove my mike up your left nostril, but while you're here, can you tell the nation what the problem is," they ask."
'Well, it's really very simple. I . . . . (here insert noise of several 500 horsepower engines) . . . and that's that." "That's too bad. Thanks Colin" But then again Colin Bond is
Mr. Niceguy and is always willing to give an answer to any question, except his age.

Other drivers aren't always as obliging.
"Excuse me, but. . . "
"F--k off, I don't want to talk," "I'm sorry, but I'm Sneak Scooply from the. . . " "Listen, wiII you piss off or they'll be printing a story about a dead journo, OK?" It may be a little crude, but it always has so much more character than a simple "No Comment". Last, but not least, are the spectators. At $13 a pop, they want every ounce of enjoyment they can squeeze from the weekend, whether it involves watching the race or not.
But even racegoers come in two groups: the first group stands opposite pit straight, watching the race as it unfolds, with great interest and enthusiasm. The second is far more interesting, inhabiting a section of the circuit known as McPhiliamy Park - a hell-hole at the top of the mountain.

This is the noisy section of the crowd, the partisans who know of only two cars in the race. . . Toranas and Falcons. The rest merely make up the numbers and occasionally roll over or something, to break the boredom.
Bathurst is the unofficial site of the Australian beer-drinking championship that starts whenever you get there and finishes when you pass out.
They celebrate every night, get drunk, sleep, and sometimes even force down some food.
It isn't unusual to find some poor soul buried under a pile of empties after battling through the night to stay in touch with his peers.

That was Bathurst 1978, and it will be the same again in 1979.
The crowds, the appalling conditions, and the greed of the ARDC will remain the same. No, come to think of it, the ARDC's greed will probably grow, as it invariably does. High prices won't stop anyone; Bathurst is still Bathurst, and the people who go there will be back - only their age will have changed.

Aussies-Online is offering you, the Australian Motor Racing fans, an opportunity to go back in the past and watch the full Bathurst race on DVD from your favorite Bathurst year.

Check the menu on the left for some new 500 races